Team Disoriented made the 6.5 hr trek to Christmas, FL to race the Pangea BOAR Adventure Race.  Unlike last time, we actually showed up to the Main Transition Area (TA) prior to the 7AM registration time so that we could get our maps and instruction booklet as early as possible. 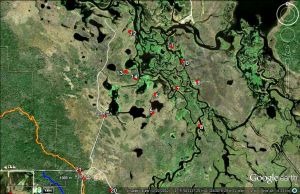 We even had a gear bin rather than having our stuff scattered in the back of the SUV.  However, as we tried to map out our course using the top of the gear bin as a working surface, we quickly discovered how nice it would be to have a table (next item on the gear list).

The funny thing about Adventure Racing is that I can never get it in my head what we are allowed to do and not.  The Main TA was right next to a cow field and Checkpoint 1 (CP1) was located within the field with real, live cows and I’m asking Ana and Stu, “Are we supposed to go through the cow field?  Are we supposed to hop over this fence or somehow go around?” Well the answer became evident as soon as Greg directed us to stage our bikes on the other side of the fence, in the field.  OK, game on, let’s go play with the cows.

The race started with a short sprint to spread the field prior to getting on the bikes and getting CP1-CP4.  We hit CP1 by following the pack, and headed toward CP2 where we started encountering our first cows.  I hear Stu shout, “That dude just got attacked by a cow.”  It seems that Nate from the Canyoneros did something to piss off one of the bovines and it decided to charge him.  I don’t think the cow actually did anything but that charge would have been enough for me to add my own cow patty to the field.  And speaking of poop, there were cow patties a plenty in Christmas.

We picked up CP2 and the on our way to CP3, the terrain got worse.  At one point, I hit a hole that just swallowed my front tire and I did a beautiful pirouette over my handlebars.  The terrain had us moving so slowly that my flip looked like one of those slow-motion clips from the Matrix.  There was nothing I could do.  Of course, when I put my hand down to catch my fall, it landed right in the middle of a cow patty.  Somewhere in Christmas there’s a 12-inch high pile of poo with my palm print in it.  After hopping the fence between CP2 and CP3, the ground got so rough that we couldn’t pedal our bikes and ended up running with them for about 200 yards.  Pedalling again, we picked up CP3 and CP4 before heading to the Boat TA.

We got to the Boat TA and I thought we were doing pretty well.  Of course the fast teams were already gone but I thought we were solidly mid-pack at this time.  But then it all started to fall apart.  Our transition to the boat was slow as we trepidly launched, trying not to capsize at the start again.  Of course Ron heckled us by saying, “Let me know if anyone plans on capsizing so I can get my camera ready!”  Well, we didn’t capsize but we didn’t break any speed records either.  Realizing that canoeing isn’t our strong suite, our plan was to go east and pick up CP5 and CP6, then head back to the Boat TA where we would head north to pick up CP14, 13, and 12 since these looked easy enough.  We figured that CPs 7-10 could get tricky given all the twists and turns of the river and we would have to make the call on the fly, depending on how settled we felt in the boat and how much time we had been on the canoe. 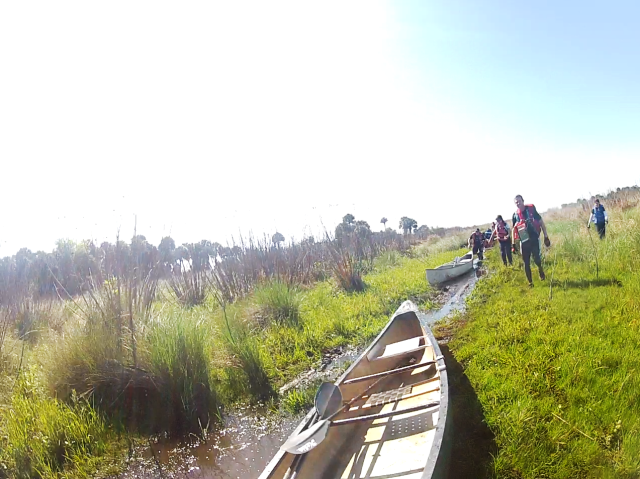 From the Boat TA, we zigged and zagged across the large lake towards CP5 and joked with the canoes behind us that we were maneuvering to keep them from passing.  Of course, being so slow, there was no way we could keep anyone from passing us.  We got CP5 and CP6 without issue but then saw other teams portaging east from CP6 to pick up CP7.  This made us reconsider our plan and we decided to follow suite.  Stu practically yanked the canoe across the wetlands by himself while I had to keep pulling Ana out of thigh-high muck.  We got to CP7 by following the SW bend in the river, while other teams simply cut across.  We then headed down to CP8, which we got without issue.  From CP8, we started running into issues.  I hadn’t measured the distance between CP8 and CP9 so I wasn’t sure of how far it was and we ended overshooting CP9.  We paddled all the way to CP10 where we ran into other racers and learned of our mistake.  At least we picked up CP10 while we were there.  We then decided to pick up CP11 since it was so close, skip CP12, and head back down to pick up CP9 before returning to the Boat TA.  We landed where we thought CP11 was and hunted around for WAY TOO LONG before finally giving up.  That was totally my fault as I didn’t want to give up on the CP.  Taking a look at the GPS track, you can see we weren’t anywhere close to CP11.  We had once again overshot our target.

Giving up on CP11, we started to head south to CP9 but then got turned around in the numerous channels between CP11 and CP10  We were frustrated at this point and ready to get off the canoe and I am grateful for not being smacked with a paddle.  We finally got to CP9, made the punch and headed north again to hit the east-west channel just south of CP10 that would take us to CP14.  Once again, we overshot our target and went all the way back to CP11 and picked up a channel there that ended up taking us to CP14.  Not measuring the distance between checkpoints and estimating paddling time was plain stupid on my part and cost us.  We picked up CP14 then CP13 without incident and headed to the Boat TA.

From the Boat TA, we went to the Foot 1 TA to begin the orienteering section.  We decided to hit these in order, CP15-20, after some gentle coaxing from Ron.  We found 15-17 without incident but lost some time finding CP18.  We did find a snake basking on a palm frond, but didn’t get close enough to identify the type.  I’m sure it was poisonous, probably the deadliest snake in Florida because, well, that would just make my blog post cooler.  Anyway, CP19 and CP20 were found alongside a trail straight out of Tough Mudder and I’m proud to know that my shoes and socks aided the demucking processing going on at the Orlando Wetlands.

From Foot 1, we went to the Main TA and decide to hit the final Bike Segment picking up the CPs in reverse order.  Here I almost made another stupid mistake, thinking that CP22 was our last checkpoint on this segment.  Luckily, we checked the punch before heading back to the Main TA and noticed that one punch was missing.  We picked up CP21 and then headed back, arriving at the Main TA at 2:55.  Not wanting to give up without a fight, we decided to try for at least one if not two Foot 2 CPs.  I knew we should be able to get CP31 and return before time expired, so off we raced.  Thinking that I had seen CP31 from the road earlier in the race, we ended up overshooting it.  We backtracked, read the Instruction Booklet and realized it was buried in the woods off of the blue trail.  We finally found it but had no more time to lose and raced back to the Main TA, checking in at 3:07 and just missing a 1 point penalty.  (Post race note: If you’re used to Pangea races you probably realized that if teams are 1 second over the stop time they are docked 1 point.  During the race I was recalling another AR that we did where racers had up until 10 minutes after the stop time to check in without being docked.  So in the end, that extra point we raced off for was fruitless since it was subsequently taken away because we came in late.  Another stupid mistake but at least it didn’t really cost us anything.)

In summary, I thought we had done really well in all the segments except the Canoe leg.  I was really proud of how the team pushed to get that one extra CP at the end.  I know that I made quite a few navigational errors that cost us time but in the end we did okay for our 3rd race and we had a great time.  I couldn’t find two better teammates. 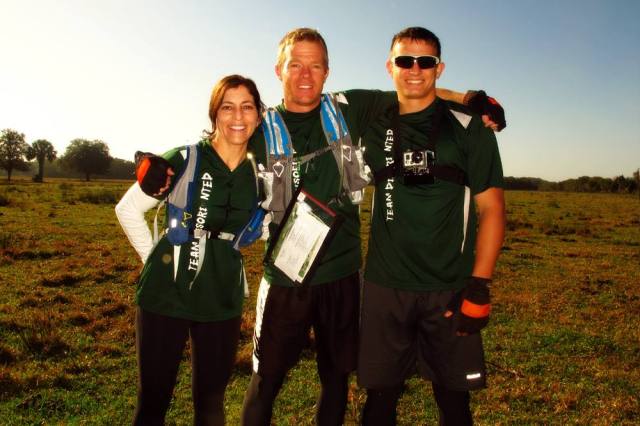 Since we missed the Turkey Burn AR and there weren’t any adventure races close to us between now and the Resolution AR in January, we decided to sign up for the Round the Bay Relay and Ultra.  Stu was visiting his family in south Florida and couldn’t make it, so we ran it as a 2-person relay.  The day prior to the race, the forecast called for 100% rain with up to 1 inch per hour and temps in the low 50’s.  Let’s just say that neither Ana nor I were very excited by this.  We live in Florida so we don’t do cold weather very well and we consider anything less than 70 degrees to be cold.  We made a late night decision to run to Columbia at Silver Sands Outlet to look for rain gear that we could wear during the race.  Ana got a sweet deal on the Compounder rain jacket and I chose the Tech Attack.  There are some really nice benefits to living close to an outlet mall as the prices were much lower than retail.  We also scored some new gloves.  Paired with our Under Armour cold gear that we got before Tough Mudder, we were set.

Our start time was 6:30AM.  The race course started at Fudpucker’s on Okaloosa Island and made a giant loop around Choctawhatchee Bay for a total distance of 36.77 miles.

Luckily for us, the forecasted downpour stayed away.  While it drizzled the whole race and the temps started in the 40’s, the weather was much better than it could have been.

I thought that the relay format was a lot of fun and we look forward to doing it again next year but with a team rather than a pair.  Not because the mileage is too much, but rather because we think doing it as a team relay will make it a lot more fun.

I don’t have our official time but looking at the Runtastic GPS time, it appears that we averaged an 8:30 mile pace, which for us is pretty good.  The best part is that supposedly we burned 2550kcal each and so I feel no shame having eaten the pizza, beer and Oreos post race.

The Backpacker Bushwhacker race report is finally posted and can be found here or by going to our Race Reports page.