There is nothing worse than the walk of shame.  You know, that walk you have to make after you realize that you blew right past the first checkpoint in a race and have to slink back towards it.  I don’t know what it is about the first checkpoint in an adventure race, but I always struggle with it.  It’s like I’ve never held a map and compass before.  Who put this paper with all the squiggly lines in my hand and what am I supposed to do with this floating needle thingy!?  Maybe it’s nerves or excitement or just turning off the nav when every team is racing to the same CP.  I don’t know, but I hate it and I never feel settled until the first CP is punched.  Howl at the Moon started off no differently.  The good news is that Ron captured it all on camera…what a swell guy!

At CP1 there was an option to shorten the foot section by swimming across Kitching Creek.  After taking a look at the inky black swamp water, I was all for the longer route.  I’m chicken, I know, I’m okay with it.  This decision added about 2 miles to our trek, making it 11.5 miles total.  Other than this shortcut, I really didn’t see anywhere else to save time on this section, so we went around collecting CPs in order.  Somewhere along CP3, we ran into the Warriors, a couple from South Africa that are working in Florida.  They’ve done a few Expedition Africa adventure races and it was fun to talk with them.   We stayed together until CP6, where they decided to take a different route to CP7.  Pretty awesome that at a small adventure race in Florida we’d run across a team from ½ way around the world.

Last year we got to ride the Camp Murphey off road bike trails and were looking forward to riding them again this year.  They are managed by www.clubscrub.org and are fantastic.  This time, though, the CPs were not right on the trail.  Four controls were “can’t miss” on-trail, but the remaining six were placed off-trail.  Because we had ran the entire first foot section, we were able to do this technical bike section in daylight, which was a huge help.  We were doing well, trying to catch up with Good ‘Nuff, which is impossible for us on bike sections…or foot sections…or canoe sections, for that matter.

Somewhere between CP20 and CP21, we ran across a dog on the trail.  No owners in sight, just wandering around.  Of course Ana had to stop, check the collar, and call the owner.  After 5-7 minutes trying to reunite the dog with its owner, they finally show up.  A happy ending and we were back on the trail.

By this time, I felt like we hadn’t really enjoyed bushwhacking through thickets and briars, so I sent us on a random bash through some really nasty stuff in the hunt for CP23.  This was actually an easy control to find, if you started looking in the right place…but what’s the fun in that.

We finished the single track and then made a mad dash back to the transition area, racing to cross the railroad tracks as a train was approaching.

From the main TA, we transitioned to canoe and started our paddle west along the Loxahatchee River.  Night had descended, the little sliver of moon provided little illumination, and the beautiful Loxahatchee took on a spooky appearance as our headlamps swept across the water’s edge, illuminating cypress trees, mangrove roots and the yellow eyes of gators sheltered within them.  Our first 3 CPs on the paddle where CPs 1, 2, and 4 from the foot trek section.  We decided to land the canoe at CP1 and jog north to CP2 for fear that the shallow creek would make the paddle tougher.  I think this saved us some time, but we lost 5-10 minutes trying to relocate CP1, even though we had already been there previously on the foot section.  Bummer!

After collecting CP1 & 2, we crossed Kitching Creek by boat to get CP4.  This was another CP that should have been easy.  We had been there before, we were at the right bend of the river, but we just didn’t spot it.  Another 10 minutes wasted here, and I could feel my frustration level building.

We had 2 CPs remaining for the paddle section and both were further south, where the Loxahatchee River turns into meandering shallow creeks, swallowed up by the surrounding swamp.  All I can tell you is that it’s a mess and following this watery trail at night was frustrating.

Just prior to reaching CP27 along Cypress Creek, we ran into the Warriors, heading back from the bridge where the CP was located.  They had turned back in frustration, not being able to locate the checkpoint.  They had also lost their passport along the way.  We asked if they’d like to search for the CP with us, but at this point their frustration level was too high and they were ready to head back.

When we got to the bridge, I could tell why.  We couldn’t find the CP either.  The clue was, “Date on Pile N bank Cypress Creek.”  We looked at the north bridge pylon for a date and didn’t see it.  We looked at all of the bridge pylons for a date and didn’t see any.  We forded the creek and looked at all the pylons on the south side of the creek for a date…nothing.  We were frustrated and ready to turn back too until we checked the southbound I-95 pylon and saw a date scratched into the concrete.  We ran back to the pylon on the north bank of cypress creek and maybe a foot from the base was the date.  I guess our headlamps had made it difficult to see.  Had we known what we were looking for, this would have taken us seconds.  Instead it took us 15 minutes. 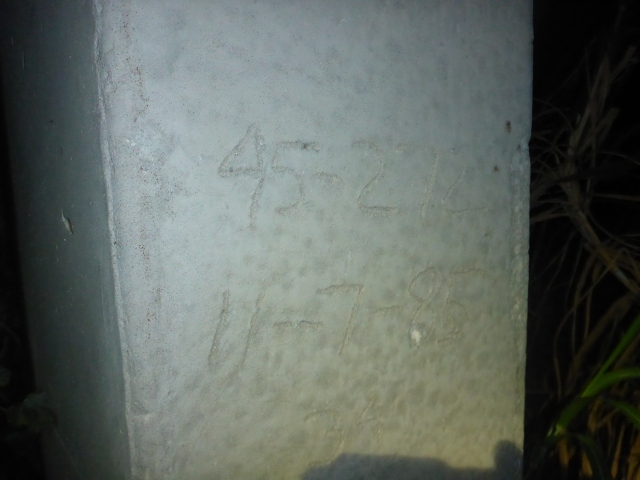 At CP28 we ran into the same problem.  This time it wasn’t the date, we knew where to find that.  Instead, the clue was, “DOT# Casting# Above N. Pile Cap.”  Once again, I had no clue what I was looking for, but we were told there would be an FLX sign with an arrow pointing to it so we would know we got the right number.  17 minutes wasted here and all I can say is…

Ron…you know I love you man!

Back on the canoes, we paddled back to the main TA to salvage any type of race we had left.

The final section would be a bike to all of the controls we hit during the foot section.  However, this time, instead of punching the controls, we were to take pictures of ourselves at a few of them.  Once again CP1 would cause us problems.  We had already been here twice during this race, so I have no idea why we couldn’t find it easily.  I swear Ron was moving it a few yards further south each time we went out to look for it.

After CP1, we rode up to CP2, and here I made my genius move of the race.  You see, when we were here on foot, we decided to cross the creek and bushwhack to the next checkpoint.  In my head I was thinking, “Just do what you did on the foot section.”  So, I did.  We crossed the creek with our bikes and bike-whacked through to the trail.  Now, Ana has had to tolerate a lot of stupid things from me over the past 20 years of marriage.  But nothing…NOTHING…has been as stupid as making her haul her bike through this jungle of sawtooth palmettos, briars, and vines.  The double bonus was that ½ way through the mess, I realized that there was a much quicker, much easier way to get where we wanted to go and all of it along perfectly groomed bike trail.  But, being ½ way through, it made no sense to turn around now, so we pushed through.  The woods of Jonathan Dickinson State Park still echo with my screams and curses!  Another 25 minutes wasted.

The good news though is that somewhere along the trail we met up with Running in Circles.  This group of four firefighters were definitely running circles around us.  They had a late night and had to start the race an hour behind everyone else, and here they were at the front of the pack.  With an hour credit, there was no reason to race them to the finish line and there was no way we were going to catch Good ‘Nuff, so we just cruised it in, picking up the final CPs and enjoying the conversations along the way.  Sometimes you have to throttle it back and just enjoy the fun of it all. 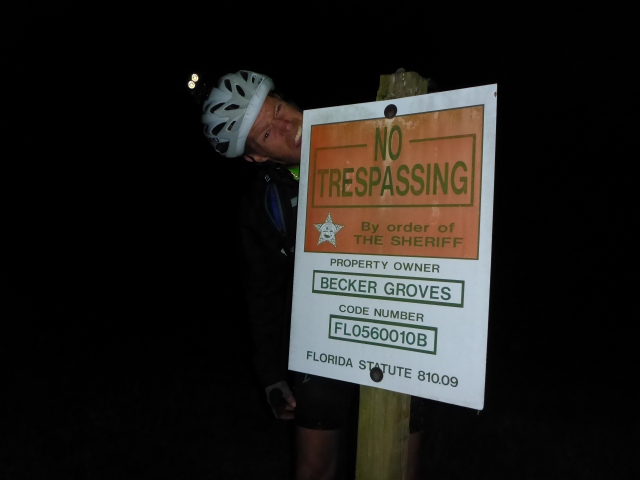 After 15 hours and 18 minutes of solid racing, we finished in 3rd place overall, 2nd place co-ed, and had a blast doing it.

Once again, FLX Adventures put on a fun race.  Jonathan Dickinson is a great park and the single track is amazing.  Most of all, I’m very grateful that Ana didn’t kill me in the middle of the night during that horrendous bike whack.

A big thanks to our friends for helping us making it all possible!