We didn’t race the Pangea Sea 2 Sea, so I can’t offer much from a racer perspective.  For a race report, you’ll have to check out Ron Eaglin’s blog or the Canyoneros.  Plus, I’m a noob, so what do I know anyway.  However, since we hope to race it next year, I thought I would be a race volunteer so that I could get a better appreciation of a 72-hour race.  I did come away with a few tidbits that may be of use…maybe not.  So, if you’re interested, read on.

If you’re a volunteer loading bikes and a racer passes you the bike that they have been riding for multiple hours, don’t grab it by the seat pad as one might typically do.  That seat has been sponging up butt sweat for the last few hours and is just waiting for your hand to splash down onto it.  But don’t worry, if you forget this rule, it’ll only take one or two incidences before it’s committed to memory for life.

#2 Florida can get cold…really cold…and wet…and sometimes it is really cold and wet, and that sucks

Adventure racing in Florida, “The Sunshine State”, how bad can it get.  Well, it can get really bad.  There is something about the damp coldness here that can chill you to the bone making it almost impossible to warm up.  So, don’t let the moniker fool you, sometimes this isn’t the sunshine state so don’t be fooled into not packing adequate cold and wet weather gear.

If your bike, paddle bag, gear bin or whatever is not ready at a transition area (TA), relax, don’t get upset.  Sometimes, because of the way the racing field is spread out, racers get to TA’s before the volunteers can set it up.  Just make a note of when you arrived at the TA, the race director will be informed and concessions will be made.  The delay will not negatively affect your outcome and you can and should enjoy the moment to grab extra food, a little nap, or some friendly team bonding.  And, please don’t get upset with the volunteers, we don’t have any control over when we are sent to set up a TA.

#4 Lose the love for your bike

We all love our bikes, especially if you’ve sank $6k into a carbon fiber masterpiece.  Volunteers understand this and we really try to load the bikes in such a way as to avoid damaging them.  But, if getting a scratch on your bike is going to give you an embolism, it may be better for you to bring a trash bike that you don’t mind getting damaged. 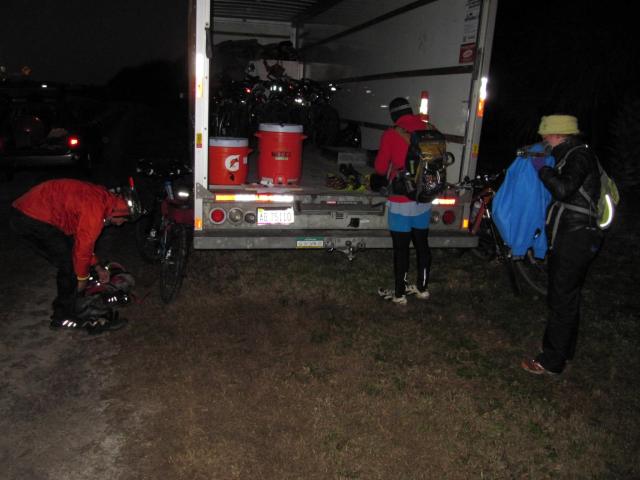 Volunteers probably don’t know as much as you would hope, or perhaps I should say this volunteer may not have known as much as some racers would have hoped.  For the Sea 2 Sea, some volunteers are there for the whole event and not getting much more rest than some of the racers, so they may not be as mentally alert as one would hope.  In addition, this may be the first event they have volunteered for so, unintentional mistakes will be made.  Just know that all volunteers are trying their best.

Getting 24 teams and all of their associated gear across the state of Florida is not an easy task.  The race director, the staff, and volunteers are working very hard to make your race go as smoothly as possible.  If the race seems to go smoothly, believe me that it is organized chaos behind the scenes. 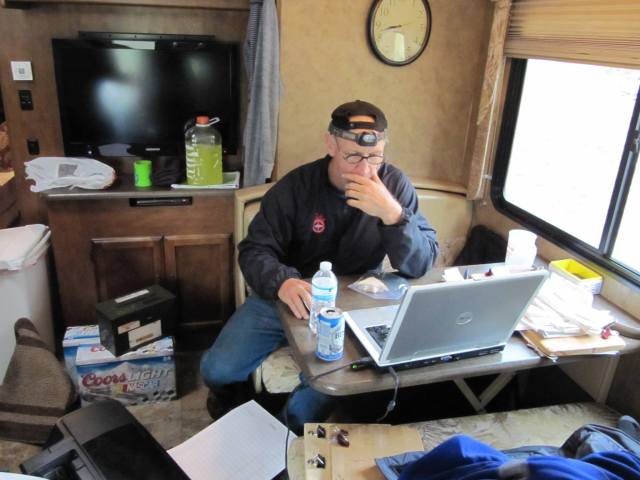 It’s your stuff, you’d probably like to find it quickly, especially in the dark when it’s cold and raining.  If your stuff is marked well, the volunteers will try their best to put all of your gear together.  What do I mean by marked well?  Each team member’s bike should have the team name clearly marked in a conspicuous location.  Gear bins should have large markings on them.  In addition, I would suggest using geometric shapes to mark your bins so that you can quickly find them.  See the bin marked with a large X below?  Super easy to spot, right. 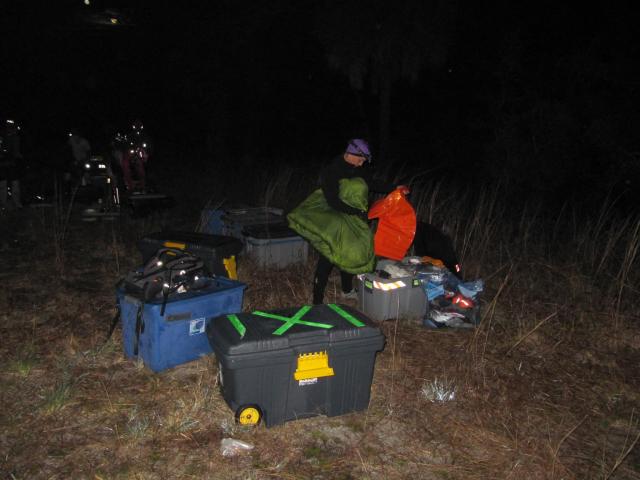 Bring all of your team bikes and bike bag to the drop off location together.  If you bring all of your gear to the drop off location as a team, you won’t have to worry about your stuff getting separated.  In addition, it will probably be loaded and unloaded at the same time, meaning that all team bikes and bike bag will be placed in the same area.  If you bring gear separately, it may not be unloaded and placed together, and worse yet it may get loaded on separate trucks and delivered at separate times. Note, this didn’t happen at the Sea 2 Sea because the volunteers were so awesome.

#9 Make it a quickie

Teams train very hard to increase their endurance and speed and then they waste minutes in the Transition Area (TA).  Yes, some transitions will be slow but most can be sped up.  It’s hard to make up 10-15 minutes on the bike or canoe, but it is super easy to waste that time in a TA.  Make your transitions as quick as possible when you are planning on moving out, especially if you are cold and/or wet.  If you are already cold coming into the TA and your transition is slow, you will get increasingly colder the longer you hang around the TA.  When you come in, your body is still warmed from the physical exertion but as you linger around, that heat dissipates and you may find yourself too cold to continue. 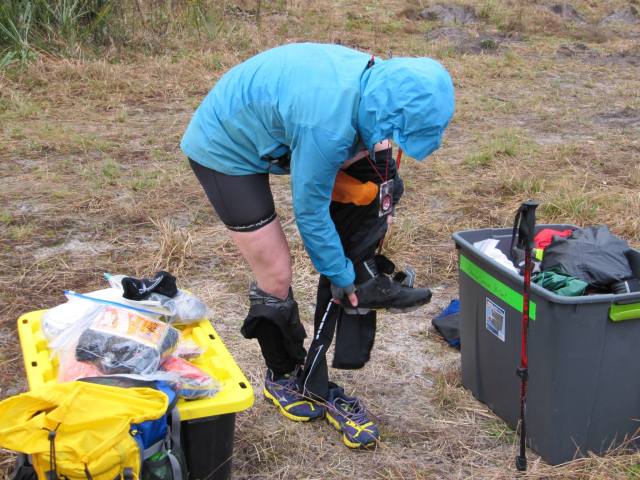 Florida can get very cold and wet, see #2 above.  With this in mind I would make 2 recommendations, keep a small tent in your gear bin and carry multiple emergency blankets and don’t hesitate to use them.  There may be times when you have access to your gear bin and need to rest your team.  Maybe the weather is particularly crappy, or a teammate needs a break before going on, wouldn’t it be nice to have a small tent that you could set up quickly to get out of the weather and rest a little.  Remember this is a 72 hour race and things happen.  A small tent is a nice luxury, especially since you won’t be carrying it.  Also, have multiple emergency blankets.  They are small, easily stored and you should have more than one so that there is never any hesitation to break one out. 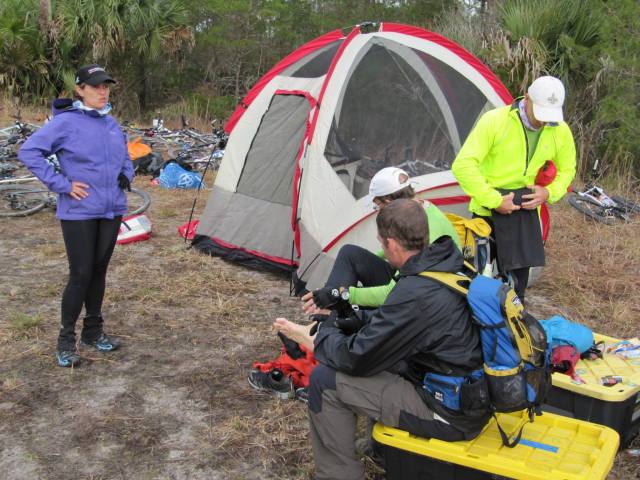 Volunteer for a long race.  It is almost as fun as being in one and you will learn a lot.  Plus you get to scope out the competition’s gear and see if there are any ideas you like.  The other cool thing is that you get to meet many of the racers, and believe me Adventure Racers are the coolest people you’ll ever get to meet.

Finally, I’d like to thank Greg, all the Pangea staff and the other volunteers for allowing me to be a part of this event.  I’d especially like to thank John and Jamie for sharing their sandwiches with me on those desolate TAs.  I had a great time and learned a lot.