Hey guys, I really need to stop for a sec.

It seems I have a little chaffing issue I need to take care of, I answer.

Let’s just say that the tip of the spear has been buffed to a high gloss.

No worries, I continue, if it comes down to it I have a bagel in my pack that I can shove down my pants for the rest of the race.

And so began our final big bike section for the 24Hr Hogback Adventure Race in Ocoee, Tennessee.

I have been looking forward to racing the Hogback with Ana since I first learned that Adventure Capitalists were putting it on. Not only would the race be in a beautiful section of the Smoky Mountains, it would also include guided whitewater rafting as part of the prologue–awesome sauce!

Unfortunately, we weren’t able to work it out where Ana and I could go, and I was extremely bummed. Then, at the last minute, I was asked by Craig Sheriff if I’d like to race with him and Bill Dean. Why yes I would, thank you. And luckily for me, Ana was gracious enough to let me race it without her…what an angel!

Bill, Craig and I met at Quest Expeditions, race HQ, the afternoon before the race. I, having returned from Boston the night before, had a car full of unpacked gear and food and a bike that needed fixing.  All of which I had thrown into the car at the last minute.

At 4PM, we were given the map, a massive 1:24k scale squiggly lined monster that had more contour curves on it than this Florida boy had seen before. We were also given a sheet with UTM coordinates for every checkpoint, except those of the orienteering course, which would be plotted during the race.

We quickly scrambled to our hotel room at the Whitewater Inn to begin plotting CPs and trying to make route choices. Actually, Bill and Craig did this, I was still sorting out my crap.  We had to be back at Quest by 6pm for the prerace briefing, a team-building exercise and dinner. The prerace brief was quick and efficient and the team building exercise would determine the order of raft that the teams would be in for the start of the race. Josh Braun, the race director, had a great idea. One person from each team raced to pick up a 100-piece jigsaw puzzle in a ziploc bag and bring it to the rest of the team where they worked together to solve the puzzle with no image to work from. We quickly put together an image of a large rubber duck and ended up being the 2nd team finished. This put us in raft #2 the next day. 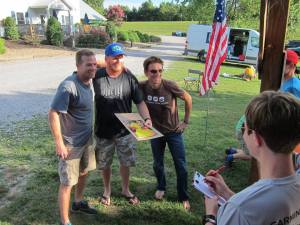 “I will not try to stand up in the Ocoee” our guide had us chant together prior to launching into the cold river leading to Class IV rapids that were once part of the ’96 Olympics. I had no intent of falling in the river at all, so I wedged my feet even harder into a crease of the inflatable raft.

Down the river we cruised, plunging through rapids with names like Smiley’s, Slam Dunk, Humongous and Godzilla before spilling out and hitting Edge of the World. Water sprayed everywhere as we crashed into wall after wall of whitewater. Most times I hate getting wet prior to an adventure race, but this was well worth it. We yelped, and hollered, and paddled and laughed a lot. This was by far, the best start to an AR that I have done! Our guide, Clay, from Quest Expeditions was very professional, well-trained, humorous and fun. I look forward to taking my whole family there and recreating the experience. Especially because I’m too dumb to figure out how to operate a GoPro and ended up recording the flattest part of the river trip rather that the most exciting. Bummer!

Like drowned rats, we scrambled off our raft at TA1 to find our bikes and start Bike 1.  We flew south on I-64 and hit the Brush Creek Trails just south of the highway.

Craig led the navigation, and we nailed this section with Bill’s eagle eyes picking off the CPs visible from the trail.  We quickly made our way to TA2 where we transitioned to Bike 2 along the Tanasi Trail System, an IMBA Epic.

Many times I lit up my brakes crashing down the rocky, rooty trail but mostly it was an uphill slog that the race director aptly named Granny Gear. 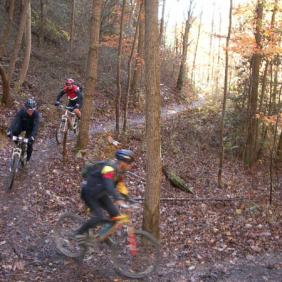 For some reason CP14 gave us, and a few other teams, a lot of difficulty.  Josh had said that he expected mid-pack teams to be able to clear the course if their navigation was clean, so we weren’t eager to give up on this checkpoint.  We first stopped at a reentrant we thought was the correct one.  However, there were other teams there and they said that they didn’t find the CP, so we tried a different reentrant a little further down the road.  When we weren’t able to locate the CP, we went to a known intersection and backtracked to re-attack the CP.  It was getting frustrating.  We decided to attack one more time, using a straight section of the road as a marker, and this time we went right to the CP (off the reentrant we stopped at first).  Happy that we had found it and were still clearing the course, we headed off to TA3 and the beginning of the orienteering section.

Well, this is where it all went to hell and it started with the very first checkpoint.  CP16 oh how I hate you!  Of course, we hit the o-course as it’s turning dark, which is never a good thing for me.  Those little orange and white markers are hard enough to find in the daytime, much less so at night. 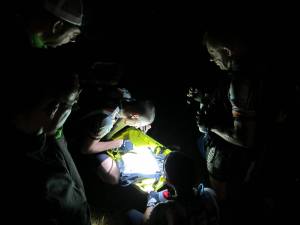 We thought CP16 would be straight forward–hit the peak of the mound, keep going due west, cross an old trail and bam, there it is.  What we got was a big heap of NOPE!  I don’t think that I have ever ran into so many brier bushes in my life.  This was like trying to hug a porcupine and I had my RailRider Bushwacker Pants on (which are awesome but that’s a review for another day).  Anyway, we attacked the CP from the east, we even tried from the north, but in the end CP16 bested us with her prickly defenses and we wasted too much time on it…so much for clearing the course.

From CP16, things somewhat picked up, we were able to get CP17 without an issue.  However, finding the trail that led to CP18 was problematic.  We found a trail but then it seemed to disappear, or not go in the direction we wanted.  After awhile, and confirmation from another team that the trail did indeed exist, we found it.  This led us to CP18 and CP19 and by then we were done.  We realized we were sucking on the foot nav and headed off to the Bike 3 section where we hoped the nav would be easier.

Feeling somewhat defeated from the orienteering section, we hit Bike 3.  Craig again took the navigation and we cleaned this section without much difficulty except for the hills.  By now, my legs were about exhausted. The ups felt like forever and the downs were white knuckled descents of gravel, hairpin turns, and darkness. 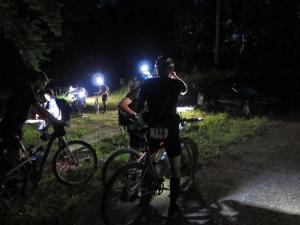 Over and over again we blasted down gravel roads and I had to constantly remind myself to not brake in the middle of a turn.  This is also when I had my chaffing issue that we don’t need to discuss further other than to say a sock in the pants helps enhance one’s manliness and provide an extra barrier against chaffing.  What did you expect me to do, throw duct tape on it?

You know, if there’s one thing I really like to do after spending almost 18 hours on a bike it’s sitting on a hard plastic canoe seat and paddling for 3-4 hours.  We launched our canoe shortly before sunrise right beside Team Ad House Adventure. 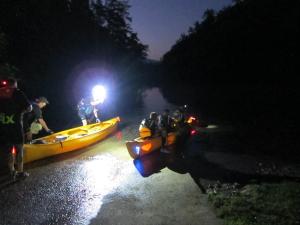 To be competitive in this race, we knew we would have to make some strategic decisions.  Craig suggested that we skip the closest 2 checkpoints and head towards the furthest CPs we thought we could get in the remaining time.  That way if we got pressed for time, we could make a last minute decision to skip CPs and race for the finish. 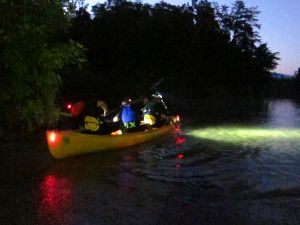 This section went really well.  Bill sat in the center and navigated us to the checkpoints without faltering, Craig kept falling asleep in the back and would almost fall into the water, and I paddled in the front barking at everyone to keep paddling. I like to think I was kindly cheering everyone on to victory, but you know, everyone’s got an opinion.  We wanted to be back on land by 9:45AM to give us ample time to get to the finish at 11AM and this meant that we scrapped the furthest checkpoint on Mitchell Hill.  In hindsight, I’m confident we could have cleared this section too.  We were paddling very strong, hitting 5MPH on the GPS.

After the boat, we just had to pick up two checkpoints on the race to the Finish.  We picked these up and rolled into the Finish after 22 hours and 46 minutes of racing.  My GPS logged 85.5 miles traveled with 9200 feet of elevation gained.  After the results were tallied, we ended up 2nd in the Open Division (yes, there were more than 2 teams in our division although the picture below doesn’t make it seem that way).

As a trophy, we were given these awesome, custom made Hogback AR coffee mugs from Forman Pottery.  They look amazing and my coffee has never tasted better.

This was an amazing race.  Josh and his team put together one of the most professional, well-organized races that I have been in.  The scenery was beautiful, the course was well laid out, the whitewater rafting prologue was epic.  I can’t say enough good things about this race.  The transition areas were well stocked, our gear was available on time, mid-race someone gave me a beer…I mean, it doesn’t get any better.  Well, you could have taken out those damn briers on CP16.  But, probably the most important thing I learned is that Josh can sing the complete Happy Birthday song without ever changing his pitch.  Honestly, it was like listening to Stephen Hawking sing it…amazing.

A big thanks to Josh and all the volunteers that made this race so successful.  We will DEFINITELY be back in 2016 and I’m bringing my amazing wife with me this time!

(Yes, the GPS was approved, sealed in a bag and never visible during the race)