It all started with Stu wanting to do a Tough Mudder and me absolutely refusing.  In fact, I think my exact words were, “No way in hell.” Then, he had to go and tell my wife about it and she, of course, thought it would be super cool.  So, there was no way I could refuse and retain my Man Card.

A Tough Mudder is typically 10-12 miles with 20-25 obstacles and since I had never ran more than 3 miles at once, I was in desperate need of training.  Ana had already completed a 1/2 marathon and a full marathon, plus she does P90x and Insanity on a regular basis, so she was good to go.  The only thing I do on a regular basis is drink beer.  The next thing I know, Ana has me on a training plan.  We used an abbreviated plan from the book she used for her marathons, “Four Months to a Four Hour Marathon” and trained for a 1/2 marathon.

About 2 weeks prior to the Tough Mudder, we had a long run day that was supposed to be 12 miles.  Ana calls me at work and says that since we have to run 12 miles, maybe there’s a 1/2 marathon going on nearby and we can just do it.  Come to find out, the Pensacola Marathon was going on that weekend and all of us signed up.  My goal was to complete it in under 2 hours, which I thought was respectable.  Ana and I came across at a corrected time of 01:55:20 or 8min 43sec per mile. 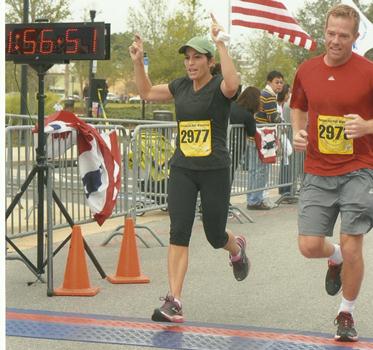 Stu came in slightly behind with a very respectable 02:08:01, that we blame on the chili con carne from the previous night 😉 The event was a blast, though I doubt I’ll ever run a 1/2 marathon again.